De Workshop is in het Engels.
Vertaling is beschikbaar. 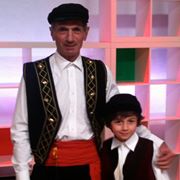 You will learn the Basics of Dances from Crete, Lesbos and
of Popular Dances throughout Greece.
The Teacher will also tell more about the Greek DanceCulture, the background of the Dances and the Costumes used for Dancing.

Manolis Iskis is Greek and a Professional Dancer.
For years he had his own Dance School on Lesbos.
Now he lives and works in the Netherlands.
More about Manolis you’ll find on his Facebook Page.

the Location
theOffice
/ A Place with lots of Light, lots of Space and a Wonderful DanceFloor, on the Fifth Floor of an empty OfficeBuilding close to the PeacePalace/
Alexanderveld 84-97
2585 DB The Hague

the Journey
Free Parking in the surrounding streets.
The Trams 1 and 9 have stops close to the Office.

Registration
by sending an email or message to
ingeborg@bewogenbewegen.nl
or
06 13709912

You are very Welcome to Dance!

“Folk Dancing is one of the most interesting aspects of Greece. The many iterations of Folk Dancing have been around since the dawn of the Greek Civilization itself.

The citizens of ancient Greece believed Folk Dances to be spiritual in nature. Plato himself wrote:

“The Dance, of all the Arts, is the one that most influences the Soul. Dancing is Divine in its nature and is the Gift of the Gods.”

This form of thinking was held by many of the Greek people, and is one of the primary reasons why it’s still so popular today.
In ancient times, Dance was one of the main pillars of the nation’s educational system and was used to cultivate the talents within the children of Greece.
Folk Dances were most commonly held in lieu of grand and extravagant celebrations, and were also used in wartime preparations as a means to give soldiers the confidence they needed before going out to battle.

There are a wealth of Folk Dances that have retained their popularity up to this day. Though there are many forms of Folk Dancing, the two basic categories of which all Dances derive from are the Leaping Dance and the Trailing Dance, also known as Syrtos.
Both of these Dances are Open Circle.

Syrtos is known as the oldest form of Folk Dancing, yet is also the most popular today. Leaping Dances tend to be the livelier and more rugged of the two, while the Syrtos is meant to be a more serene and peaceful Dance, though there are exceptions to this rule.

One of the many appealing attributes of Greek Folk Dancing are the myriad of types. There are Solo Dances, Male Dances, Female Dances, and Mixed Dances, the latter of which was only recently accepted into the Greek culture.

Syrtos is a name used to describe a vast collection of Dances, typically Line Dances that form a Semi Circle. Many regions in Greece have their own variation of the Syrtos Dance, as each region has tailored it to match their own traditions. Today, the Syrtos Dances are used in a number of Greek festivities and weddings.
The most well known of these Dances is the Kalamatianos, which uses the same steps as the Syrtos, though the former is more upbeat and faster paced. The Kalamatianos Dance is one of the few Greek Folk Dances that is popular the world over and is commonly used in social gatherings and other festive occasions. It is also typically regarded as the National Dance of Greece. The Kalamatianos Dance is believed to have first appeared in the ancient writings of Homer, as it was referenced in the great poem of lliad. The name itself was derived from the town of Kalamata, which is located in Southern Greece.

Leaping Dances are used to categorize hopping Dances that are very lively and energetic, many of them derived from the island of Crete in the ancient times. Long ago, men were the sole participants of the majority of these Dances, though women are included much more often these days. The most popular of these is the Pentozali Dance, which is a very exciting and vigorous Dance.
Though the Kalamatianos is said to be the national Dance of Greece, the Pentozali rivals it in popularity. This specific form of Greek Folk Dance is known to have originated during the historical Turkish domination. It was created when the soldiers of Greece were preparing their fifth revolt against the Turkish empire. While the revolt ultimately failed, the Dance lived on in the Hearts of the Greeks.

There is a Vibrant History behind Greece’s Love for Dancing!”

This website uses cookies to improve your experience while you navigate through the website. Out of these cookies, the cookies that are categorized as necessary are stored on your browser as they are essential for the working of basic functionalities of the website. We also use third-party cookies that help us analyze and understand how you use this website. These cookies will be stored in your browser only with your consent. You also have the option to opt-out of these cookies. But opting out of some of these cookies may have an effect on your browsing experience.
Necessary Altijd ingeschakeld
Necessary cookies are absolutely essential for the website to function properly. This category only includes cookies that ensures basic functionalities and security features of the website. These cookies do not store any personal information.
Non-necessary
Any cookies that may not be particularly necessary for the website to function and is used specifically to collect user personal data via analytics, ads, other embedded contents are termed as non-necessary cookies. It is mandatory to procure user consent prior to running these cookies on your website.
OPSLAAN & ACCEPTEREN